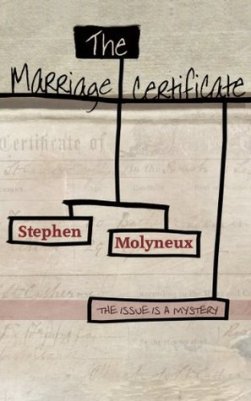 The Marriage Certificate by Stephen Molyneux is definitely one for the genealogists. It opens with the discovery of a marriage certificate in an antiques centre by Peter Sefton, an amateur genealogist. Thinking that there is something vaguely inappropriate for such a personal memento to be on display, he buys it in the hope of perhaps returning it to the descendants of the couple named. There are three interwoven narrative strands – Peter’s search for the family of the couple; the stories of those named on the certificate, both the bride and groom and their witnesses as well as their children; and another modern strand involving a professional heir hunting company, Highborn Research, attempting to trace the heirs of an unclaimed estate.

The Marriage Certificate is not a highly crafted novel but I found it quite gripping, especially in the latter part where there is a race against time between Peter and Highborn Research to claim the small estate. The steps followed by family historians to uncover and verify the lives of those in the past are woven into the story, including the hitches and pitfalls most of us have faced along the way as well as those delicious moments we have all experienced just before opening a new certificate, thinking that this one might be that chink that will allow you to demolish the massive brick wall blocking progress on a particular family line. The historical strand of the narrative touches on a number of the social issues of the early part of the 20th century including the difficulties faced by unmarried mothers and the lives of young working women.

I don’t know how enthralling the book would be for those who are not genealogy obsessed but I would recommend it as a good Sunday afternoon read for anyone with an interest in family history.

More thoughts on The Marriage Certificate can be found at GoodReads.