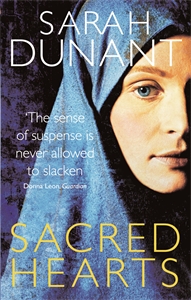 Sacred Hearts is set in the Benedictine convent of Santa Caterina in Ferrara in 1570, a time of upheaval with changes brought about by the Counter-reformation, the Church’s response to the Protestant Reformation, threatening to alter the way the nuns lives are lived. The Church reformers have not yet set their eyes on Santa Caterina so, although the nuns are enclosed, many are still in touch with the world around them. Life inside the convent is as stratified as secular society with choir nuns, women of good birth who bring with them dowries and influential names, and the conversa, ‘lay’ nuns who in effect are servants performing the menial tasks that keep the convent running. The convent operates as any city state, with the same problems of finance, factions and cliques, shifting loyalties and jealousies and gossip.

Within its walls are a variety of women, all seeking God, yet each with her individual aspirations. Madonna Chiaria is the abbess of Santa Caterina, born of a noble family she has lived in the convent since childhood, a consummate politician, her first allegiance is to the convent. Suora Umiliana, the novice mistress, feels the changing winds outside the convent and would prefer a more austere regime that would bring the nuns closer to God. Suora Zuana is the dispensary mistress, an intelligent  woman skilled in herbs and healing, who has brought with her into the convent the thirst for knowledge of the power of nature to heal the body learned from her father, a professor of medicine at the University of Ferrara. Then there is Suora Benedicta, the choir mistress, a gifted composer and musician, and Suora Magdalena, almost forgotten in her cell, an aesthetic given to ecstasy and visions who, in the past, has been visited with the stigmata.

This is a time of inflated dowries which means that many families can only afford to have one daughter married, those left sent to convents where the dowry intended to pay for their upkeep for the rest of their lives is not so great. In time many of these reluctant novices will learn to adjust and to make a bearable life, some even finding their own niche within the convent and purposeful work that would have been denied them in the outside world.

A reluctant novice with the voice of an angel, sixteen year old Serafina, is thrust into the orderly life of Santa Caterina, upsetting not just the routines but the carefully crafted peace of mind of some of the nuns. In love with her young music teacher, she has refused the marriage arranged for her and so her family has married her more biddable younger sister to the suitor and sent Serafina to the convent. Serafina is insistent that she has been coerced, her vows ‘words from the mouth, not from the heart’. With a sympathetic bishop, these words would be enough to have her vows annulled but that would mean that the convent would lose her dowry and shame would be brought on her family.  Rebellious, angry, screaming herself hoarse, Serafina is placed under the care of patient Suora Zuana who, remembering her own reluctant entry into the convent, hopes to draw Serafina to the acceptance and compromise necessary to live enclosed within the convent for the rest of her days. Serafina’s own struggle to hold on to her dream of freedom is played out against the shifting balance of power between the abbess and the novice mistress for the soul of the convent.

The narrative moves forward through the eyes of the main characters.  Sarah Dunant’s plain prose manages to create a rich and exquisitely imagined world underpinned by firm scholarship. The story begins slowly but becomes increasingly compelling as the story of Serafina’s struggles unfolds with growing urgency towards the end. Sacred Hearts is a novel well worth reading for lovers of 16th century historical fiction.

And for those who are interested in the music produced by convents like Santa Caterina, an interesting article on the life and music of Suor Leonora d’Este, the daughter Lucrezia Borgia.