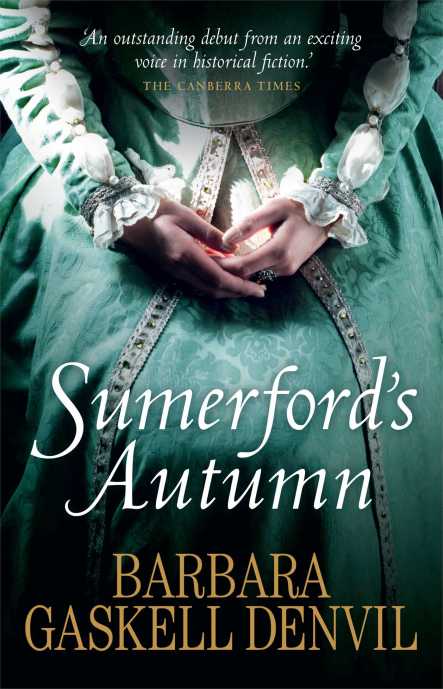 Sumerford’s Autumn begins in 1497, twelve years after Henry VII won the crown of England by defeating Richard III at the Battle of Bosworth. The Earl of Sumerford, who fought on the wrong side, has been doing his best ever since to rehabilitate the family name and keep his family below notice of the king. He has four adult sons, the eldest is Humphrey, his heir, simple and newly married to Jennine, an attractive woman who does not quite behave as the Lady she is supposed to be. His second son, Brice, is secretive with inexplicable access to money. Then there is Gerald with his barely hidden sympathies for Perkin Warbeck, whom he believes to be Edward IV’s son, Richard, Duke of York who is now in Henry’s custody. Finally, Ludovic, the youngest, who has few prospects so has to find his own way in the world. He also appears to have a sense of chivalry not quite worn off since his knightly training. Into this world of secrets comes Alysson Welles, an orphaned young woman who has sunk into poverty. Her brother, a groom at Sumerford castle, has recently been kicked to death by the Earl’s charger. Angry about the Sumerfords’ callous treatment of her family, Alysson accidentally shoots Ludovic when he is out hunting (she only wanted to scare him). Alysson tends to his wounds and Ludovic, for reasons he cannot quite explain himself, rather than hand Alysson over to have her due punishment, finds her a position as a waiting woman to Jennine. Alysson is drawn into the intrigues of this family where everyone has secrets and no one is exactly as they seem. Her relationship with Ludovic develops slowly as the whole family is eventually drawn into Gerald’s political intrigues.

This book springs to life from the very first page. Each character is well developed with a unique voice, instantly recognizable . The family interactions are enthralling, amusing and realistic. The tight, intricately crafted plot involves treason, betrayal, piracy, smuggling and even torture and execution. Denvil creates intense moments of fear, suspense and genuine terror. She presents late 15th century life realistically with vividly described squalor and brutality, alongside stunning descriptions of the countryside.

One minor element did not quite work for me. Although the spirit that haunts Ludovic serves to spur him to action and, in the end, allows a complete resolution, it seemed at odds with the realism of the rest of the novel. As there are no other supernatural elements, this pulled me out of the story as I puzzled over what it ‘really’ was. This is a very small quibble in an otherwise lush and spellbinding book.

Sumerford’s Autumn is thoroughly enjoyable historical fiction in the best traditions of the genre. It is certainly my favourite style with fictional characters and their activities seamlessly interwoven into an accurate historical timeline peopled with those we know were there.