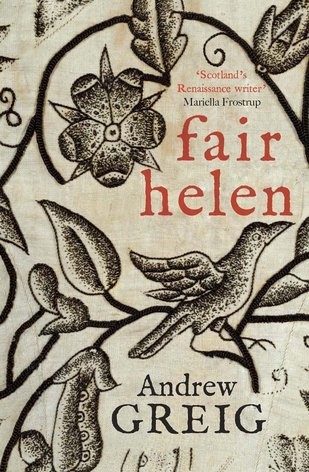 In Fair Helen Andrew Greig takes the Border ballad ‘Fair Helen of Kirkconnel Lea’ and weaves a story of intrigue and doomed love in the Scottish border lands of the late 16th century. The not quite reliable narrator is Harry Langton cousin of Helen Irvine and best friend of Adam Fleming, the Scottish Romeo and Juliet of this story of forbidden lovers. Harry, writing decades later, says his aim is to save his long dead friends from ‘the unyielding stone of ballad’ and write of the reality behind the carefully crafted words of the ballad. But this is as much Harry’s story as Helen and Adam’s with the course of his life altered by his involvement with them.

The period, with its political machinations and casual violence, is vividly realized. At times tense and compelling, the story has surprising moments of humour. Scots dialect is used for much of the dialogue but is understandable in context; however, there is a glossary at the end of the book. The prose itself is beautiful and poetic. I found, though, that it was the complex character of Harry that stayed in my mind long after I had finished the book.