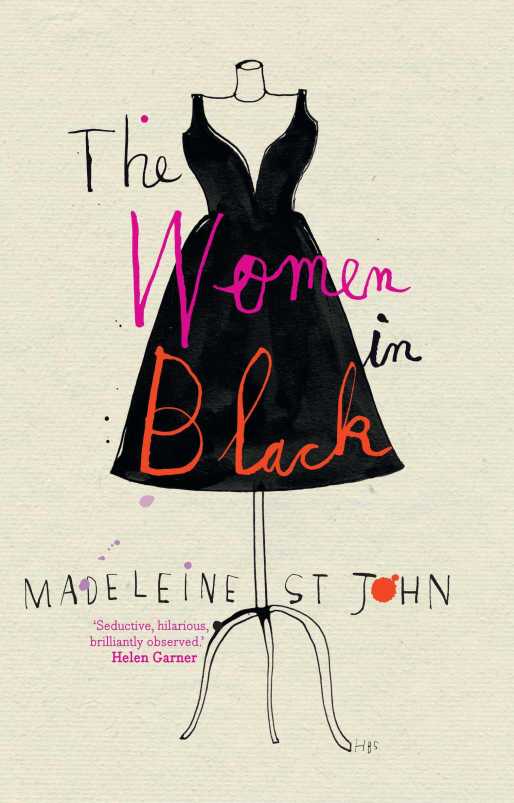 The Women in Black is a delightful book set at the end of the 1950s in the Ladies Cocktail Frocks section on the second floor of F G Goode’s Department Store in Sydney (loosely based on David Jones). The story centres around the lives of the black-frocked sales assistants working there – Patty, Mrs Williams, in her early thirties, married but childless; Fay, Miss Baines, at 29 afraid she had been left on the shelf; and Miss Jacobs, ‘stout and elderly’ and in charge of alterations. Further along from Ladies Cocktail Frocks is the Model Gown boutique, decorated with Louis XVI-style furniture and a chandelier, where gowns from London and Paris can be found with labels like Hartnell, Chanel and Dior. Model Gowns is run by elegant and sophisticated Magda Szombathelyi. Overseeing all is the floor manager, Mr Ryder, and the buyer, Miss Cartwright. At the beginning of a hot December, 17-year-old Lesley Miles, now calling herself Lisa, arrives to take up a temporary holiday job during the pre and post-Christmas rush when women from the ‘better class suburbs of Sydney’ descend on Goode’s to do their Christmas shopping and to acquire party frocks. Lisa is awaiting exam results and quietly nursing dreams of winning a Commonwealth Scholarship which will allow her to go to university.

The novel gives the reader glimpses of these women’s lives outside work. Patty is less than happy in her childless marriage to an inarticulate and seemingly insensitive man. Fay is bored and despairing of the endless line of self-absorbed Mr Wrongs her best friend lines up for her. Miss Jacobs has worked at Goode’s longer than anyone can remember yet has managed to keep her life completely private. Magda is the most content of the women; surrounded by friends, she  enjoys a rich cultural life and has ambitions of setting up her own  ‘extremely exclusive and exorbitantly expensive frock shop’. She is Slovenian and married to Stefan, a Hungarian man she met soon after arriving Australia; both were Displaced Persons following World War 2, ‘each had survived hell’. Lisa lives with her parents, her unassertive but doting mother and her self-centred father who is set against any daughter of his attending University. With school finished, Lisa senses that her ‘world is about to be transformed and her with it’. Magda sees in the thin schoolgirl someone she can have ‘the pleasure of instructing…in matters of cut, style, taste; Amies, Fath, Dior’. Lisa happily steps into this world of new possibilities.

The Women in Black captures perfectly Australia at this time, on the brink of the changes that the 1960s brought – the self-satisfied complacency of those without interest in the world beyond their own experience, the state of marriages and the unequal position of women within them married to men who were not bad but often lacking imagination and sensitivity. Broad vistas were about to open with tertiary education achievable for clever young men and women of the working class and an enriching of culture with the arrival of European migrants who had an entirely different experience of the world.

St John’s prose is unobtrusive, sharply observed and lightly humourous. Each of the major characters is honestly yet sympathetically portrayed. I had quite a few chuckles of recognition of the way we were, as Australia didn’t change overnight and some attitudes and behaviours lingered through the 1960s and into the ’70s. The Women in Black was published in 1993 yet it has captured the sunlight and hopefulness of that earlier period.

I read the Text edition of the book which has an Introduction by Bruce Beresford, the filmmaker who was a friend and contemporary of Madeleine St John, and an Obitiary at the end. I generally leave any Introduction until I have fully read a book to avoid spoilers and to gain the most from the analysis. In this case, I am inclined to recommend avoiding both the Introduction and the Obituary altogether or else leaving them for a day or two. They add nothing to an understanding of the book and, for me at least, rather diminished the pleasant afterglow. The book stands wonderfully on its own without any knowledge of the author. The book has now been made into a film, Ladies in Black, directed by Beresford, due for release in September 2018 (I can hardly wait!). It does look like it will do the book justice (trailer below).

This is another review here, which I have chosen for no reason other than it answers the Sydney-centric slights against Melbourne found in the book. There is a long history of rivalry between the two cities and I like to see my town defended.