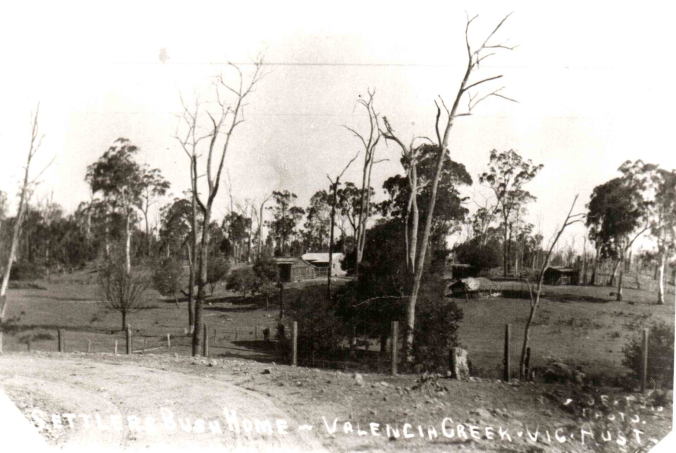 The O’Connor farm at Valencia Creek

It is 80 years today since the Black Friday bushfires which devastated the Gippsland area of Victoria. In 1989, on the 50th anniversary of those fires, my mother, Catherine Mary (McGrath) Merrick, put her memories of that day on paper .

‘What a dreadful day. The hills of East Gippsland and beyond Melbourne were alive with fire. I was 13 years of age and on school holidays. The build up to this dreadful day began earlier in the week as far as we in Maffra could see it. The previous Wednesday afternoon the sky darkened for some time but that was nothing like the blackness of the Friday to come. Granny O’Connor [Sarah Ann Watson] was living back at Uncle John and Aunty Julia’s place [the O’Connor farm at Valencia Creek]. Uncle John and Aunty Julia had come to Maffra that Friday morning and to our place for lunch. About one o’clock it started to darken and Mum kept saying to them they had better go as she was afraid for Granny back at Valencia Creek with the four O’Connor children: John, Margaret, Kathleen and James. Granny, at this time, was walking around helped by two walking sticks and was no longer able to cope with a fire if it came. Uncle John and Aunty Julia didn’t leave until nearly twenty past one. Cars did not travel fast in those days, particularly on a bush track, and I suppose it would have been at least a three quarters of an hour drive. Theirs was the last farm up that way at Valencia.

From about half past one on the sky became darker and darker and the air hotter and hotter. Jean was at the Church with Alma Munley and Peggy Johnson doing the flowers for Sunday and by quarter to two Mum was getting quite agitated although trying not to show it. She was back and forth to the front gate looking to see if Jean was coming. Jean arrived safe and well at five to two. 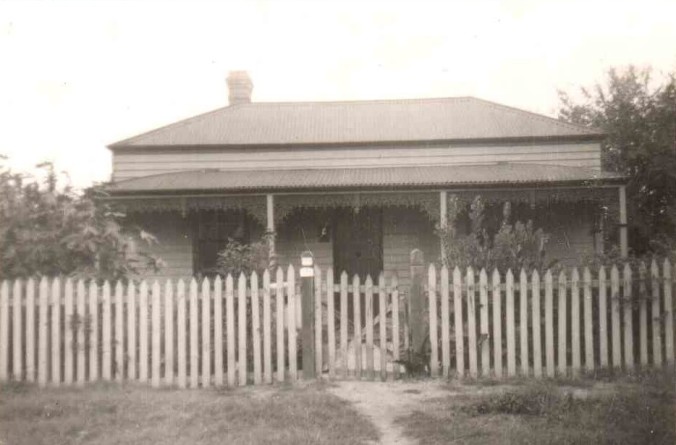 By two o’clock the sky had completely darkened. It was darker than night and the air so hot and thick. It was like a very very heavy fog where you are only able to see several feet in front of you. Hot and still with the smell of burning leaves. It was frightening. The street lights were on but you couldn’t even see the light poles just a small blue glow in the air. The old dog, Skipper, was under the tank-stand whimpering so Mum let him into the front room. She normally didn’t allow the dog in the house. He cowered under the chair Mum was sitting in. The cat was also inside. As soon as the sky had started to darken the chooks had taken to the roost and the birds had stopped making noises. It was quiet and so eerie. I have never experienced darkness like that since. Mum, Jean, Jack and I said the Rosary. The temperature was 104 F (Jean says 112F) and the smell of burning gum leaves so strong although the fires weren’t near us, though we didn’t know that at the time. About half past seven or later the darkness lifted to a deep red glow all over the sky. You could now see about 30 feet in front of you. It was like deep red dusk. I can remember going down the yard with Mum to feed the chooks. They had come down from the roost but didn’t seem to know where they were.

The red darkness was so eerie. We were scared and wondered what would happen next but a cool change arrived during the night. The next morning, Saturday, was clear and bright. There were lumps of bark in the yard, not great lumps but more like small pieces and gum leaves and dead leaves. Its strange but I don’t remember any wind for the pieces of bark and leaves to be in the yard. I remember the darkness, the heat and the oppressive feeling as though it were yesterday, even though it was fifty years ago. The air felt as though you could pick it up in your hand. This felt bad for us but how terrifying for the people where the fires were. 71 people dead that week. The suffering and the devastation of people – their livelihood, their homes, their families and friends wiped out. And the heroic way people fought those fires. People never forget that day.

Dad was down at The Heart, out of Sale (near where the RAAF Base is now). He, a Mr Ruthberg (Charles Snr) and another man were camped in a hut. It was about eight weeks before the sugar beet was ready to be processed. They were hoeing the beet when the darkness came over. They were only a few hundred yards from the hut but it took them three hours to reach it. The darkness was so bad that they couldn’t easily find it. They eventually found a channel that ran near the camp and they followed that. Dad said had they not stumbled across the channel they never would have found their way home until the light came the next morning. Dad was hoping we were OK and we were hoping Dad was OK.

Aunty Kate and Uncle Tom McInerney were living in Yarragon at the time and I remember her mentioning later that they saw fires in the distance and the smell of burning. A friend I was in the Army with, Miriam Dafter, lived at Warburton and vividly described the fires. I think her family had a saw mill and it was wiped out. Our memories of the day are different – hers were of the horror and terror, the heroic battles to save places and people from the fires and mine of the darkness.

Granny O’Connor died exactly seven weeks after the fires and Mum said her health deteriorated rapidly after Black Friday as she suffered great shock on that day. She was such a dear old lady with a tremendous sense of humour.’

Mum’s sister Jean’s memories were similar Mum’s. She said the smoke from the fires was so thick that you couldn’t see two feet in front of you, with the smell of burning gum leaves thick on the air. They were inside, on their knees, saying the rosary. Jean said that they had no telephone or radio so had no idea what was happening. She truly thought the end of the world had come.

In this world of instant communication and the never-ending news cycle, it is difficult to imagine the terror of not knowing what is happening. Without even a radio, information came only by word of mouth so it is understandable that Aunty Jean, at twelve years only, would have thought it was the end of the world. 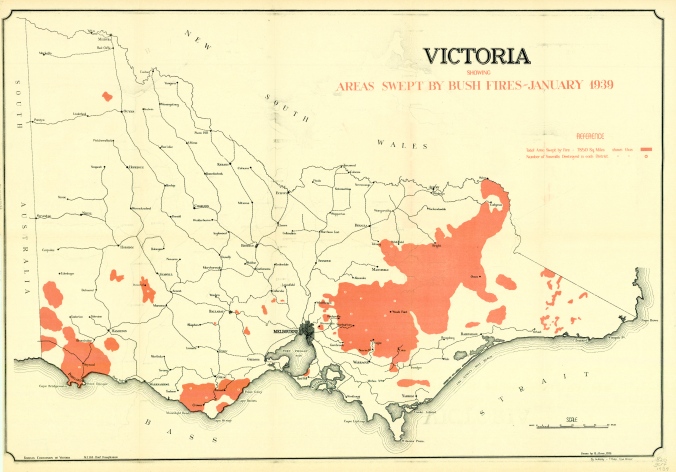 While Black Friday has been a vivid part of our family memories, these bushfires did not loom so large in the memories of people in other parts of Victoria. My mother-in-law, living in central Victoria, had only the vaguest memory of the Gippsland fires but, no doubt, there were other fires closer to home in other years that loomed larger for her.

Seventy-one people died during the Black Friday bushfires. Almost 2,000,000 hectares were burnt with several towns totally destroyed. The Royal Commission established as a result of these fires led to major changes in fire prevention and forest management that stood Victoria in good stead until the 1980s when the Ash Wednesday bushfires occurred on 8 February 1983 and 75 people died with 418,000 hectares destroyed. By far the greatest catastrophe was the 2009 Black Saturday fires, ‘only’ 450,000 hectares burnt but there were 173 deaths. The temperature reached 46oC in Melbourne on that day, humidity was at 2% and the hot northwesterly winds blew at over 100 kilometres per hour. Four of the five worst bushfires in terms of fatalities have occurred in Victoria.

Born in Maffra in 1925, Mary was the eldest living child of John Daniel McGrath and Catherine O’Connor. The family lived at Avondale, then in Boisdale until 1932 when they moved back to Maffra to 61 Queen Street. Mary was educated at St Joseph’s Convent, Maffra, which was run by the Sisters of St Joseph of the Sacred Heart (the order of nuns established by St Mary McKillop). Mary left school at 14, having studied bookkeeping, shorthand and typing in her last two years at school. She went to work in the office of Woodhouse’s store in Johnson Street, Maffra and then joined the Royal Auxiliary Corps as a nursing orderly when it reformed to take other ranks during the Korean war. Mary was in the first recruit school of the reformed Nursing Corps. It was formerly the Australian Army Nursing Service and took only trained nurses until 1951, when the name was changed to the Royal Australian Army Nursing Corps and the first recruit school started on 2nd July 1951 taking in other ranks. Mary spent three years in the army and served at Puckapanyal and in the 29th Battalion Commonwealth Hospital in Kure, Japan, which was the base hospital for the Korean War wounded. She returned to Australia in March 1954 and left the army to marry Albert Joseph Merrick, a Staff Sergeant in the Royal Australian Army Medical Corp. They lived in Queensland, Puckapunyal and at the Balcombe Army base until Al left the army in 1961 and they settled in Ballarat.

My parents. Taken the day after their marriage at St Mary’s Church, Maffra on 29 April 1954.