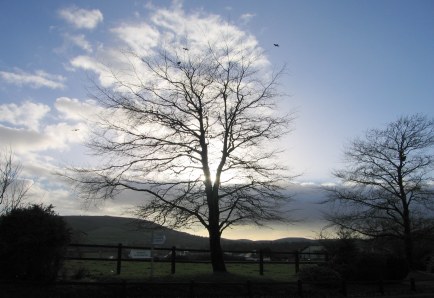 The parents of my maternal grandfather, John Daniel ‘Jack’ McGrath (1887-1971), were both born in Ireland. Jack’s mother, Margaret Ryan, was born at Drumgoole, Kilkenny in 1851 and migrated to Australia around 1869. His father, Patrick McGrath, was five and a half when his family arrived in Melbourne, Victoria in 1854. Patrick was born at Finnahy in Tipperary and was baptized at the church in Upperchurch on the 19 July 1848. He was the eldest boy of a family of ten children, seven of whom survived to adulthood. His parents, Thomas McGrath and Mary Ryan had married at Upperchurch on 2 February 1842. One of the witnesses was a Tom Ryan, possibly Mary’s brother but I have no way of knowing as one of the biggest problems for family researchers regarding Ireland is that records for most parishes commence only in the 1830s. Prior to the Catholic Emancipation Act of 1829, it was both difficult and potentially dangerous for priests to keep accurate records of Catholic baptisms, marriages and burials. So, where I have been able to trace my English ancestors back to the 17th century in some cases, the trail runs dry for the Irish in the early 19th century.

Following their marriage, Thomas and Mary lived at Finnahy where Thomas farmed. He worked 8 acres, 1 rod and 19 perches with a Net Annual Value of £4/10/- for the land and 10 shillings for the buildings. On the land was a house, a ‘cow house’ and a forge. I presume that Thomas was a blacksmith – in Victorian records he is described initially as a labourer and later a farmer except for the marriage registration of his daughter Johannah (30 March 1865 at Soldiers Hill, Ballarat to William Henry Mitchell) where his occupation is given as a blacksmith.

Little is known about Thomas and Mary’s life in Ireland; however, there are a couple of stories that have been handed down through the family. When my grandfather, Jack, was a boy, an old man by the name of Hazlitt was visiting his parents’ home in Boisdale. Mr Hazlitt remarked that Jack’s grandfather had been ‘run out of Ireland with an English bayonet in his arse bone’. While this is clearly not the case as Thomas was an assisted immigrant, it does hint at some difficulties with the English authorities. There was another family story of Thomas being chased by English soldiers when he came across a group of people stooking hay. They hid him amongst the hay and stood looking into the distance in one direction. When the soldiers arrived they said that they had seen someone heading in that direction. Once the soldiers were over the horizon, Thomas sped off in the opposite. I did find the following article in the Tipperary Vindicator of 23 September 1848 (p.4, c2)
BORRISOLEIGH, THURSDAY.— On this morning three blacksmiths, two of the name of Magrath, from the neighbourhood of Upperchurch, were brought into town by a party of police under the command of Mr. Malone, S.I., from some private information he received that they were connected with pike making. Other parties, it is said, are looked after.
In 1848, at the height of the Great Hunger, a nationalist rising organized by the Young Irelanders against English rule which was put down by police in Tipperary. The rising failed in part because too many people were totally occupied with the struggle of surviving the famine.

It is tempting to think the article is about Thomas as it seems to fit with family stories but I have been unable to locate court records that would confirm it. Thomas had two known brothers, Jeremiah and Philip. Jeremiah migrated with his family to Victoria in 1852 but his occupation was never given as a blacksmith; as well, there was no forge attached to his house at Drumbane as listed in the House Valuation books. I know nothing about Philip other than he was in San Francisco in 1879. Of course, there may have been other brothers I am unaware of. It remains a tantalizing possibility.

By 1853 Thomas and Mary must have decided that the best future for their family lay outside Ireland. On 29 Nov 1853 the family sailed from Southampton on the Medway as assisted immigrants along with 232 other government migrants, no doubt with similar hopes. By the time of the family’s departure, Thomas and Mary’s two eldest daughters had died so it was two daughters (Bridget and Johannah) and three sons (Patrick, Michael and William) who came with them.

The Medway arrived in Melbourne on 22 February 1854, after a journey of 87 days during which there were no deaths. There is little in the local newspapers about the arrival except for an article in the Melbourne Morning Herald of 2 March 1854.
A CHANCE FOR BACHELORS.-Yesterday, about noon, nearly a hundred female immigrants were landed from the Medway. They appeared to be a fine healthy set of young women, and well suited to the Colony. Many of them were decidedly good looking, and therefore will, in all probability, quickly change their names. There were amongst them a few that seemed to belong to what is called the educated class of society. Single gentlemen, be on the alert! They were all marched off, two and two, to the Depot, under the guidance of a vinegar faced looking old fellow, who will not long have the control of such a valuable consignment.

Through the 19th century, after the English, the Irish made up the largest number of immigrants to Australia. Of those who came to Victoria, the majority were from the south of Ireland (Tipperary, Cork, Clare, Limerick and Kerry). There was a high proportion of female immigrants, especially single women, and their arrival was often greeted with the same enthusiasm as shown in the article from the Melbourne Morning Herald. My paternal great-great-grandmother, Margaret Horigan, arrived in Hobart from Cork at the end of 1854 and a similar glowing article from the Colonial Times of 7 December 1854 (p.2, c1) described the young Irishwomen as being ‘a healthy looking superior class, especially the single females’.

Many of the Irish immigrants to Victoria settled in the Western District, with a large community in the area around Ballarat which to this day abounds with Irish names. There appears to have been a strong Tipperary presence among these Ballarat settlers. Thomas’s brother Jeremiah himself settled at Warrenheip, around four and a half miles from Ballarat.

Soon after arrival, on 13 March 1854, Thomas was engaged by a Mr Shannahay (possibly Shannaghy or Shannaha – I have been unable to identify him) for an initial period of six months at £60 with rations. The family lived for some, if not all, of their time in Melbourne at River Street in Richmond. Two more daughters, Annie and Mary Jane, were born here in 1857 and 1859. Around 1860 the family moved to the area of Miners Rest about eight miles outside Ballarat with Thomas working for W.J.T. ‘Big’ Clarke.

By 1861 they were settled at Glendaruel (seventeen miles from Ballarat) and their last child, Winifred, was born. Unfortunately Winifred died of a fever aged three months. In 1876 Thomas purchased 20 acres of land at Glendaruel and in 1878 a further 20 acres. He appears to have been leasing the initial 20 acres before buying this land. The Ballarat Star of 9 December 1869 (p. 4, c3) stated in its harvest report that T. McGrath of Glendaruel had ‘13 acres wheat, average 25 bushels; 7 acres oats, average 20 bushels’.

As Thomas and Mary and their family were law abiding and hard working, they did not make it into the more interesting public records so little is known of the family’s life at Glendaruel, apart from births and marriages. The eldest of Thomas and Mary’s surviving children, Bridget, married Patrick McDonnell in 1863 at St Alipius Church in Ballarat East. The following year Mary Ann McDonnell, the first of their 47 grandchildren, was born at Miner’s Rest. 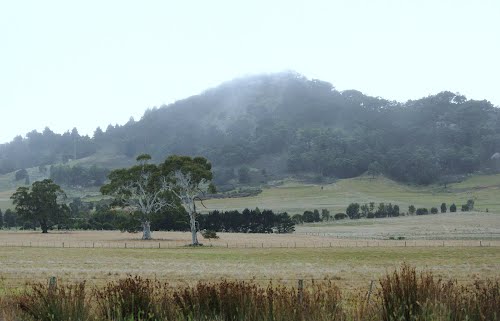 Thomas died on 19 Sep 1880 at Gendaruel aged about 64 and was buried in Coghill’s Creek cemetery. His real estate was estimated at £90 with personal possessions to the value of £31 and 10 shillings.  He left everything to Mary and after her death to his eldest son, Patrick, but stated in his will that if they decided to sell the property by mutual agreement, they should dispose of the proceeds as they wished but Mary was to reside with Patrick for the rest of her life.

By the time Thomas died, Patrick had married was working in Gippsland as a railway repairer. Thomas and Mary’s third son William appears to have remained on the farm at Geldaruel. Probate was granted on 25 May 1883 and, either later that year or early in the next, the farm was sold to a Patrick Benson. William also began working for the railways in 1883. Mary went to live with her daughter Johannah (McGrath) Mitchell in Ballarat East. She lived there until her death in 1901. 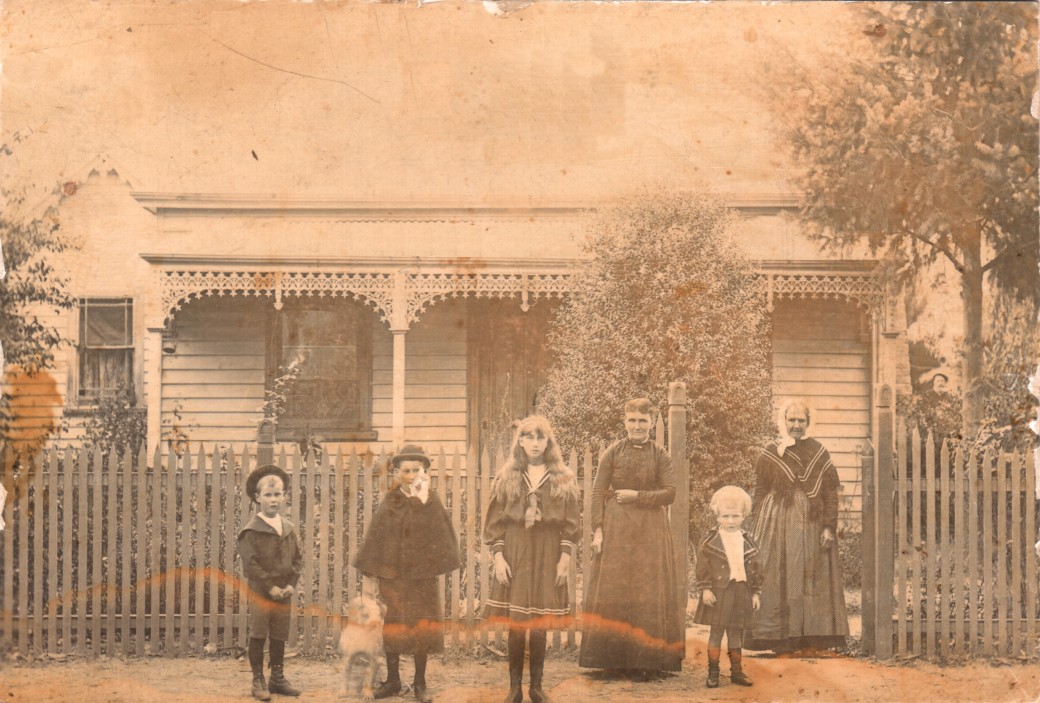 Johannah Mitchell and her mother, Mary McGrath, outside the Mitchell’s house in Victoria Street Ballarat East. Johannah’s husband, William Mitchell, is standing at the side of the house underneath the tree.
The children are most probably, from left to right, Francis, Gerald, Annie and Stephen Mitchell.
Photograph taken around 1893 or 1894.

Patrick McGrath’s family used to go to Ballarat every year on their annual holidays and stay with at the Mitchell’s house in Victoria Street, Ballarat East, near the Ballarat Orphanage. It is not often that we hear our ancestors speak but there is a story passed down of an incident on one of these visits when Patrick gave his youngest children, Jack (my grandfather) and his two sisters Kate and Annie, 3d each to spend on a trip down the street. Kate and Annie were given a silver threepence and Jack three copper pennies. Kate and Annie were two and four years younger than Jack and had not his experience of the word nor his spirit of mischief. Jack convinced them to swap their small silver coins for one of his larger copper coins each – being bigger, the copper coins must surely be of greater value! Fortunately for the girls, their grandmother Mary overheard. She made Jack give back the threepenny bits and called him a young ‘bogger’. In that perhaps we hear both her exasperation and affection for an high spirited little boy.

Mary died on 16 August 1901 at Johannah Mitchell’s house in Victoria street and was buried at Coghill’s Creek cemetery with Thomas. Her obituary, published in the Ballarat Star of 19 August 1901 (p.1, c3), gives some sense of the extensive Irish community in  and around Ballarat at the time.

McGrath – Mary, buried 18th August, 1901, aged 83 years, Coghills Creek. The funeral of the late Mrs  McGrath, relict of the late Thomas McGrath of Glendaruel, and mother of Mrs William Mitchell, of Victoria Street, Ballaarat East, took place yesterday at the Coghills Creek Cemetery. The coffin bearers were Messers P Hennessy, G McDonnell, M Harrington, and G Mitchell; the pall bearers were Messers Bourke, Kennedy, Golden and Lanigan, Cassells and Morgan. The service at the grave was conducted by the Rev Fr Brazil, and Mr Steve Wellington was the undertaker.

The decision in 1853 to leave Tipperary was no doubt made with trepidation but it gave Thomas and Mary and their children opportunities that would not have been theirs had they remained in Ireland. Thomas, who would never have been more than a tenant farmer in Ireland, died the owner of a modest farm and successful enough to leave a will. His children were free to take the advantages of a far more egalitarian society which rewarded hard work and thrift, a society that owed something of its egalitarian spirit to the Irish who had come to Australia both willingly and unwillingly.