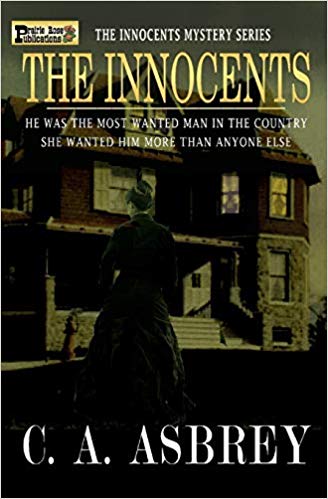 The Innocents is set in the American West in 1868. ‘The Innocents’ are Nat Quinn and Jake Conroy, a nephew and uncle team, who rob only banks and railways and are courteous to the ordinary people they may discommode during the course of a robbery. Abigail McKay, a Scottish woman, has spent weeks travelling by train in the hope of coming face to face with them and observing them. She is a Pinkerton detective at a time when even most of the other Pinkerton detectives are surprised and perturbed by the notion of a woman investigator. When The Innocents do rob her train, they are every bit as charming and handsome as their reputations. Circumstances bring them all to the town of Bannen. Nat and Jake are lying low in the high class brothel of Pearl Dubois, who has been something of a mother figure to Nat, as they work out how to deal with another gang of outlaws, violent and dangerous, who have been robbing and killing while calling themselves The Innocents. Abigail, skilfully disguised, is working as a maid at Pearl’s in the hope of learning more about the real Innocents. When two of Pearl’s women are murdered, The Innocents and Abigail enter into an uneasy alliance to discover the murderer. Their co-operation is complicated by the unacknowledged attraction between Abigail and Nat, and because Abigail is not willing to take a back seat and leave the dangerous work to the men.

From the very first page it is clear that this is a fast-paced witty novel with many genuinely amusing moments; the dialogue is an absolute delight. At the same time the dangers, threats and violence that are to be expected when dealing with cold-blooded killers are realistically drawn. The period is well-captured, not only the day-to-day reality and the grittiness of life in the old West at this time, but also the various attitudes towards women of at all social levels. The characters are well-rounded and their relationships plausible. Abigail is independent, intelligent and resilient and, despite their tough exteriors, both Nat and Jake have an innate decency. Nat is handsome, charming and good with words, while Jake is something of an enigma.

There are a number of mysteries wound through the novel beyond the identity of the false Innocents and the murderer of the two women—who Abigail is and how a respectable Scottish migrant came to be working in such a dangerous occupation, as well Nat Quinn and Jake Conroy’s pasts, what drove them to crime and the complicated nature of their relationship.

The Innocents by C A Asbery is a delightful read and is the first is in a series featuring Abigail McKay and Nat Quinn and Jake Conroy.

More reviews can be found at GoodReads.

5 thoughts on “Book Review – The Innocents by C A Asbrey”